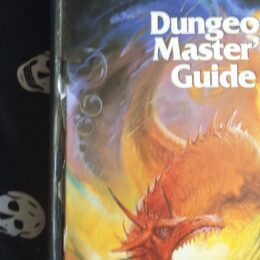 Water damage / staining / mould and / or dirt (dry now) – majority is on the board inside / flyleaf and endpapers.

Have sealed in a ziplock bag to shelve. The worst of the three copies we have.

Errata from Wizards of the Coast: corrections for first and second printing